Rihanna performed on yesterday’s x-factor – a performance which blew me away (and also made blatantly clear how rubbish some of the x-factor’s acts are – especially the [at long last] voted off Belle Amie).

In a performance that the Guardian described as a “a smart move – making it as spectacular as possible to disguise the fact that the song isn’t very good” she dodged cupcakes thrown by what looked like the Mad Hatter’s Tea Party at the Last Supper. Who knows, perhaps the madness behind her could have been her own Tea Party movement!

The Guardian’s liveblog description was fabulous in it’s clear bamboozlement:

8.32pm: Rihanna’s the third singer on, and she’s pulled out all the stops. There’s a huge banquet onstage, and the diners appear to include a tin soldier, a rabbit and Yoko Ono. Everyone’s throwing cake around. And now something’s caught fire.

It’s a smart move – making it as spectacular as possible to disguise the fact that the song isn’t very good – but Rihanna didn’t have to make this much effort. She was following Bon Jovi and Jamiroquai, after all. She could have sat around cleaning the fluff from her belly button and she still would have outclassed them both.

I was pointed to an amazing moralising Christian article by a Facebook friend recently. I’m not going to make any judgment on the diary piece in the Newyorker magazine it refers to. But I will copy one incredibly written but fabulously tangental paragraph from it.

“Why do we allow ourselves to be raped repeatededly [SIC] by the homosexual media? Who are they to invade our lives? They lure our teens and 20-somethings off into darkness with nasty promises. They violate the conscience of millions of Californians with activitst judges. They taunt the vulnerable even on our tv sets, adding subversive messages to every child’s show, from Glee to True Blood. And they are not finished yet. Once they grab the young generation from the real world, they are not even close to being finished. Who could describe or truly know what our Malthusian future holds? For now, they destroy our values with each stomp of their damp, musky sneakers on after-hours disco floors, crushing our very souls as harsh lights illuminate their flourescent Charlie Brown t-shirts and cocaine-pale faces and even then they find new frenzies, rubbing harder and harder into each other, aspiring to the perfect veneral opprobrium to all the hopes and dreams that people like Sarah Palin represent”.

I have a number of problems with this. I won’t go in to them all but

It’s a wonderful piece of prose but the implication that the homosexual media lures people is plain wrong. You can’t be told to be gay. And where I lose all respect for the writer is the implication that homosexuals are all disco dancing drug fueled sex-maniacs. By all means – from your point of view – criticise 28, male, Williamsburg, gay [who wrote the Newyorker diary] but sweeping generalisations and aggressive assertions do nothing to sell your point of view to an intelligent reader. More importantly, though – how far off of the original point of view is this? And why say that Williamsburg is “stone’s throw away” from Ground Zero when that stone would have to be thrown over three miles, if not only to exaggerate outrage? This is moralising at tangents.

There’s a lot wrong with the gay scene. Attitude’s issues issue, and the Observer report on it, prove that clearly. But surely it would be far more constructive to seek to change that, to provide alternatives, to help the disproportionately large proportion of gays who suffer problems of mental health.

The fact that “the result of living as a stigmatised minority is that you self-medicate” with drug and sex addictions proves how much damage articles like ChristWire’s do. If that’s your point of view surely it’s better to do something proactive than moralising and making sweeping judgments.

Wouldn’t life be better if…

…we thought a little more and drove a little less?

Thanks to The Bear Party who posted this in response to my earlier post.

The Gulf oil spill is a disaster. Environmentally, economically – at least for BP – and socially, for those whose lives are affected. For those of us in the UK who can’t quite comprehend the scale of this disaster this map (from 1st June) is a good comparator (click on image for full size view). 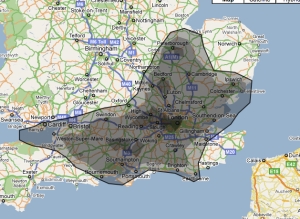 Sarah Palin, Hockey Mum of Alaska, knows exactly where the blame lies. Firstly does she not trust BP, because it’s a foreign company (it’s obviously the fault of those devious Brits!). Now she’s blaming environmentalists. Oh, no, sorry – extreme environmentalists.

Perhaps she hasn’t noticed the non Deepwater disasters in countries that – although some way from the USA – provide 40% of it’s crude oil imports? And she seems to be ignoring the fact that those environmentalists concerned with the environment are not just worried about the land that’s dug up (although sometimes that land is worth worrying about). But will America change it’s oil consumption obsession? Will we, in the UK? The only way to drive this forward is by looking at the issue as a whole – looking at the environmental agenda as a whole – and the impact of, not just spills, accidents, disasters, but oil use on the economy and on society. We fight wars over it. It socially excludes people – not just the cost of petrol to drive to and from work, but the cost implications for food, for example. We need to look at our use of fuel (again, as a whole – the need to travel, local sustainability) not just the source of our fuel (which is essential to look at).

So Colon Powell has backed Barack Obama for US President. He had apparently been disturbed by the negative tone of Mr. McCain’s campaign, which has sought to promote the idea that Barack Obama is “palling around with terrorists,” as Sarah Palin so diplomatically put it (a Socialist palling around with terrorists nonetheless). Of course this is Sarah Palin whose foreign policy experience comprises her proximity to Russia (oh and Canada too) – although she’s never met Russian delegates (maybe she wouldn’t think Obama a socialist if she had?).

Not only that, but Palin has no idea what the Bush Doctrine is. Now then, Powell “once considered as a potential candidate for the White House himself, fell out with President Bush over being forced to make the case for Saddam Hussein having weapons of mass destruction to justify the invasion of Iraq”. This is Bush, the conviction politician, who knew what he wanted and went for it – not because he listened to people, but because he listened to his gut:

Leaders make things happen and they don’t need to ask permission. Isn’t it the job of a good leader to think the big ideas, take the long view, and make his vision a reality? Well, yes, provided said leader has formed his thoughts through rigorous research, consultation with experts, and deep, careful thought. Bush’s method? “I’m not a textbook player,” he says, “I’m a gut player.”

So there we have it. Bush listened to his gut and went to war in Iraq. Great.

So there we go – Barak Obama who offers a “calm, patient, intellectual, steady approach” or McCain supported by pro-Iraq advisers – offering Bush’s gut something to think about. Surely, Dubbya, it couldn’t have just been indigestion when you were listening to your gut could it? I know who I’d be more inclined to believe.

I think this review means I now have to read Bob Woodward’s “The War Within” – not sure if that’s a daunting or exciting prospect.