9th November 1989 is a day which will be engraved on the minds of all those alive to see it. As a young child even I can remember walking down to the living room to get ready for school and my mum making me watch what had happened on BBC Breakfast News. I had no idea what was happening. But I knew I should remember it.

The German Democratic Republic was a state that found existence difficult. Whatever I may think of communism as a theory, in reality it wasn’t a pretty existence. And the East Germans knew it. Living adjacent to the West, where life was sweeter. Today’s Telegraph article gives a good idea of what life was like and why the wall fell (I am quoting from it below).

The GDR’s existence depended on barriers. Ultimately, the walls of the republic were vulnerable. Control of the frontiers required a commitment from neighbouring Hungary and Czechoslovakia to prevent East Germans from transiting to the Western lands they bordered. By the summer of 1989, socialist fraternity was fraying badly, and Hungary was no longer willing to act as a gatekeeper. Once Budapest party leaders allowed East Germans to exit to Austria in September 1989, the final act of the GDR began. Most East Germans, of course, did not want to leave, even if many longed to travel unhindered. Repeated Monday-night demonstrations in Leipzig swelled to 70,000 by mid-October, a week after the GDR celebrated its 40th anniversary. The regime could no longer control its frontiers, and chose not to contest the streets. A divided politburo ousted its old-guard members, including party chief Erich Honecker, and after massive demonstrations in Berlin, it decided to relax travel restrictions, leading to the joyous confusion of November 9.

9 November has been a recurring date in German history. “On that day in 1938, synagogues and Jewish property were destroyed by Nazi forces in what became known as Kristallnacht. It is also the day, in 1925, when the SS was founded, when the Munich beer hall putsch took place in 1923, the day the German monarchy ended in 1918, and the day the German revolution failed in 1848.”

And this history provides an important reminder of why european ‘togetherness’ – working together, learning from each other – is important, because if we can’t work with our geographical neighbours, how will we ever learn to coexist globally in an ever shrinking world? The day the wall fell marked a real watershed in European history. Over 40% of NATO members now are ex Soviet countries, a unified Germany has emerged as a strong player in Europe – after unifying and West Germany taking the crumbling former East an draging it to western standards, and even now has a leader from the East. European countries have become democratic, albeit not an easy ride, and needs to continue working together to talk, teach and learn. The European Union and institutions have a clear and important role to play in getting people working together, continuing progression to democracy, and promoting fundamental rights, equality, and consideration of environmental concerns as well as clearly transnational issues. What about homophobia in Eastern Europe, for example, or the need to work together to tackle Climate Change? I always remember my former boss, a German, who quoted his father saying “well, if we’re talking, then we’re not fighting”. Perhaps tackling the emergence of fascism is one of the most important reasons for working together.

Of course some [west] Germans I know stiff refer to it as the East, some see it as a weight around their necks. I took one of them to the East for the first time in their life a few years ago. I fell in love with East Berlin – it has a faded charm that’s been scrubbed up and buffed up, but with the history clear and obvious. The BMW showroom adjacent to the Russian Embassy on Unter den Linden is a provides a brilliant juxtaposition of Westernised modernity, pre-division urbanism and Eastern history. It’s an incredible City, with a fantastic cultural and diverse nightlife. Watching Goodbye Lenin brings back the emotions that the city itself raises in me. The sadness of demise of the old regime and comfort of familiarity against the excitement of freshness, newness has been a recurring theme through my life. 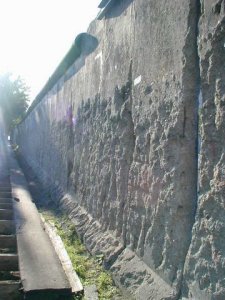 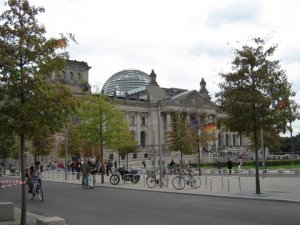 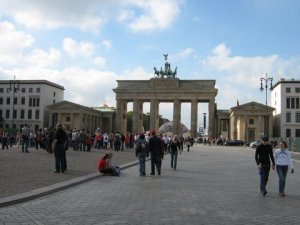 This entry was posted on Monday, November 9th, 2009 at 10:06 pm and is filed under Europe. You can follow any responses to this entry through the RSS 2.0 feed. You can leave a response, or trackback from your own site.